Have you seen my Cherokee version of the Gadsden Flag?

Gadsden began his rise to prominence as a merchant and patriot in Charleston. He prospered as a merchant, and built the wharf in Charleston that still bears his name. He was captain of a militia company during a 1759 expedition against the Cherokee.

By 1775, the snake symbol wasn’t just being printed in newspapers. It was appearing all over the colonies: on uniform buttons, on paper money, and of course, on banners and flags.

The snake symbol morphed quite a bit during its rapid, widespread adoption. It wasn’t cut up into pieces anymore as in the Ben Franklin cartoon depicting the colonies and their need to unify. 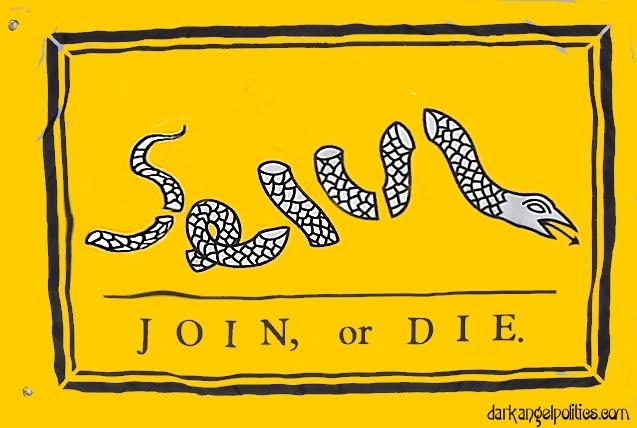 It was usually shown as an American timber rattlesnake, not a generic serpent. Further exemplifying the power of the United States. We don’t know for certain where, when, or by whom the familiar coiled rattlesnake was first used with the warning “Don’t Tread on Me.”

As you may know from my recent snake slaying, I don’t like snakes and I ain’t afraid of them either. I killed one the other day, cut it up, and skinned it.

The flag, now often used as a symbol of the American Tea Party Movement or to represent Libertarians, was once used to rally early Americans to battle the Native Americans, knowing the importance of a unified front, to dismantle the Cherokee people. The old “Divide and Conquer.”

NOW FOR SOME CHEROKEE HISTORY

In 1819, the Cherokee began holding council meetings at New Town, at the headwaters of the Oostanuala (near present-day Calhoun, Georgia). In November 1825, New Town became the capital of the Cherokee Nation, and was renamed New Echota, after the Overhill Cherokee principal town of Chota. Sequoyah’s syllabary was adopted. They had developed a police force, a judicial system, and a National Committee.

In 1827, the Cherokee Nation drafted a Constitution modeled on the United States, with executive, legislative, and judicial branches and a system of checks and balances. The two-tiered legislature was led by Major Ridge and his son John Ridge. Convinced the tribe’s survival required English-speaking leaders who could negotiate with the U.S., the legislature appointed John Ross as Principal Chief. A printing press was established at New Echota by the Vermont missionary Samuel Worcester and Major Ridge’s nephew Elias Boudinot, who had taken the name of his white benefactor, a leader of the Continental Congress and New Jersey Congressman. They translated the Bible into Cherokee syllabary.

In 1829, gold was discovered at Dahlonega, on Cherokee land claimed by Georgia. The Georgia Gold Rush was the first in U.S. history, and state officials demanded that the federal government expel the Cherokee. When Andrew Jackson was inaugurated as President in 1829, Georgia gained a strong ally in Washington.

In 1830 Congress passed the Indian Removal Act, authorizing the forcible relocation of American Indians east of the Mississippi to a new Indian Territory.

Andrew Jackson said the removal policy was an effort to prevent the Cherokee from facing extinction as a people, which he considered the fate that “the Mohegan, the Narragansett, and the Delaware” had suffered. But, there is ample evidence that the Cherokee were adapting modern farming techniques. A modern analysis shows that the area was in general in a state of economic surplus and could have accommodated both the Cherokee and new settlers.

The Cherokee brought their grievances to an US judicial review that set a precedent in Indian Country. John Ross traveled to Washington, D.C., and won support from National Republican Party leaders Henry Clay and Daniel Webster. Samuel Worcester campaigned on behalf of the Cherokee in New England, where their cause was taken up by Ralph Waldo Emerson.

In 1831 Georgia militia arrested Samuel Worcester for residing on Indian lands without a state permit, imprisoning him in Milledgeville.

In Worcester v. Georgia (1832), the US Supreme Court Chief Justice John Marshall ruled that American Indian nations were “distinct, independent political communities retaining their original natural rights,” and entitled to federal protection from the actions of state governments that infringed on their sovereignty. Worcester v. Georgia is considered one of the most important dicta in law dealing with Native Americans.

Jackson ignored the Supreme Court’s ruling, as he needed to conciliate Southern sectionalism during the era of the Nullification Crisis. His landslide reelection in 1832 emboldened calls for Cherokee removal. Georgia sold Cherokee lands to its citizens in a Land Lottery, and the state militia occupied New Echota.

The Cherokee National Council, led by John Ross, fled to Red Clay, a remote valley north of Georgia’s land claim. Ross had the support of Cherokee traditionalists, who could not imagine removal from their ancestral lands.

The Treaty of New Echota was a treaty signed on December 29, 1835, in New Echota, Georgia by officials of the United States government and representatives of a minority Cherokee political faction, the Treaty Party.

The treaty established terms under which the entire Cherokee Nation ceded its territory in the southeast and agreed to move west to the Indian Territory. Although the treaty was not approved by the Cherokee National Council nor signed by Principal Chief John Ross, it was amended and ratified by the U.S. Senate in March 1836, and became the legal basis for the forcible removal known as the Trail of Tears.

After news of the treaty became public, the officials of the Cherokee Nation from the National Party representing the large majority of Cherokee objected that they had not approved it and that the document was invalid. John Ross and the Cherokee National Council begged the Senate not to ratify the treaty (and thereby invalidate it) due to it not being negotiated by the legal representatives of the Cherokee Nation. But the Senate passed the measure in May 1836 by a single vote. Ross drew up a petition asking Congress to void the treaty—a petition which he personally delivered to Congress in the spring of 1838 with almost 16,000 signatures attached. This was nearly as many persons as the Cherokee Nation East had within its territory, according to the 1835 Henderson Roll, including women and children, who had no vote.

Benge Detachment passed through the present community of Grove Oak in
northeast Alabama in the fall of 1838. A few years ago the Alabama Chapter of the Trail
of Tears Association, under the guidance of Gail King, placed a sign in this small Sand
Mountain community marking the original path taken by more than
1,000 Cherokees. Unfortunately, someone stole the sign, much to
the disappointment of Jamie Godwin, who owns the Grove Oak
Store nearby.
Ms. Godwin, an artist and author, couldn’t wait for another
sign to be erected, so she painted a large replica on the side of
her building. Also a preservationist, her store is near Buck’s
Pocket State Park, a pristine area in Marshall, DeKalb, and
Jackson Counties. Due to a lack of funding for park staffing, some vandalism has
occurred there, including some damage to what is known as Cherokee Cave. Ms.
Godwin is leading an effort to protect the cave from further damage, and to prevent
dumping and vandalism.
Buck’s Pocket contains a large rugged gorge that served as a haven for some of
the Cherokees who managed to escape removal.

Credit : Alabama Chapter of the Trail of Tears Newsletter

Around here, in Northeast Alabama, we Cherokee remain. We are the remnants who still reside on our ancestral land. We still watch over it. We still protect it.

We see the truth being scattered and lost as dust in the wind and wonder if something can’t be done. We escaped removal, we are Cherokee. We’re still here.

For me, simply living everyday is in its own way a small act of rebellion.

I’ll write more later on the history of the Cherokee.. It should be remembered. It should be taught. Share this and tell everyone I ain’t afraid to go after a snake.

Cherokee Landowner of Cherokee Ancestral Land and “We The People- A Documentary” Director, a documentary about the Native struggle that still continues today in the Dakotas and all over the U.S.